Did you know that Louisiana has two state songs, and that the sac-a-lait is our state freshwater fish? Want to learn more about Louisiana's state symbols? Click here and find out more!.

Travel through Louisiana's swamps with Billy the bill to learn how a bill becomes a law. Bills travel through a maze of steps to be special and become a law, and Billy needs your help with his bill!

What year did Louisiana become a state? Show us what you know about your state. Do you remember what the state insect is? Try your luck with our State Quiz   The answers follow the quiz.


2. Who is the current Speaker of the House ?


3. Who is the current President of the Senate ?


8. In which branch of government is the House of Representatives & The Senate ?


12. To be elected to the LA House or Senate you must be a registered voter and a resident of the state for ?


17. Legislators may serve no more than ?


21. When did Louisiana become a state ?


22. How many different flags have flown over Louisiana since colonization ?


23. Since admission into the Union, there have been how many locations of the State Capitol ?


26. Which former LA Governor was shot in the State Capitol and is buried on its grounds ?


27. To become a State Representative, you must be ?


See How You Did

The dream of Governor Huey P. Long, the "new" State Capitol is now a symbol of pride and history for Louisiana. Completed in 1932, it only took 14 months to build. The building itself stands on a 27-acre lot and cost a mere five million dollars to build.
If you get the chance to visit Baton Rouge, this magnificent building is a must see. The tallest capitol in the United States at 450 feet and 34 floors, the front staircase is engraved with the names of the 50 U.S. states in the order they were admitted into the Union.

The inside is just as beautiful, decorated with marble, bronze, murals, and sculptures. To get into both the Senate and House chambers you have to pass through beautiful bronze doors that literally weigh a ton each!
Ironically, Huey Long was assassinated in the Capitol in 1935, just three years after its completion. He is buried on the grounds of the building, and there is a statue of his likeness that faces the front of the Capitol.
Group tours are offered by appointment, and are available seven days a week from 8:00 a.m. to 3:30 p.m. 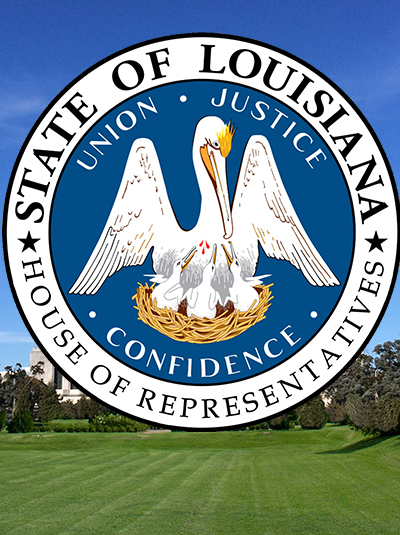 There are two groups of people that make up Louisiana's Legislature. One is the House of Representatives, the other is the Senate. Since we have two houses, our Legislature is called "bicameral." In the Latin language "bi" means two, and "camera!" means house. There are 105 state representatives and 39 state senators. They are elected to represent us every four years, called a term.

Every year, the Legislature meets in Baton Rouge, our state capital, to participate in legislative sessions. A session is when they get together to debate each other's ideas to improve our state. They write their ideas down, and we call these documents bills. If a bill gets the okay from both Houses, and the Governor likes it, it becomes a law.

In even-numbered years we have a Regular Session in which all kinds of bills are introduced. In odd-numbered years we have Fiscal Sessions in which bills dealing with money matters may be introduced. Additionally, each member may prefile ( file before session begins) not more than 5 bills that are not about money matters. Each member may also prefile an unlimited number of local or special bills(bills that do not affect the entire state) and 5 more fiscal or local bills once session begins.

Back to previous section